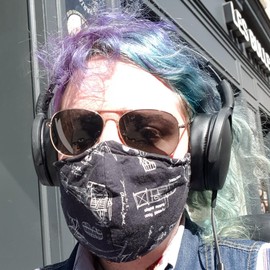 Center for Internet and Society

I am a CNRS transdisciplinary researcher working on a few wildly different projects. Some of my main interests include voting security, research methodologies and disability studies. I believe that scientists of all fields should not retreat from society but try to study and ideally fix whatever problems we observe, while keeping track of our own biases. As such, I’ve attracted some controversies because of who I am, as well as a lawsuit (which we won) against my team’s work denouncing irregularities and vulnerabilities in the French 2022 presidential primaries.

In 2021 I was recruited as a CNRS scientist (Chargée de Recherche = permanent research-only position) working in the Laboratory of Automation, Mechanics and Industrial and Human Computer Science, Polytechnic University Hauts-de-France. I am also an associate researcher at the Center for Internet and Society of the CNRS (UPR 2000). Before this, I was a postdoctoral researcher in the Digitrust Consortium of the University of Lorraine, after having defended my PhD titled “Usability: low tech, high security” at IRIF in the Distributed Algorithms and Graphs Team, for which I received the PSL 2020 award for best thesis at the Science/Humanities Interface. I was advised by Nicolas Schabanel and Ted Selker, with whom I worked on human usability of security and its applications to voting systems.

As I work between multiple fields, I do not have as much expertise as a specialist in a single field, which leads me to create collaborations with a large set of researchers and experts from different labs (my frequent collaborators include Ted Selker, Alan Sherman, Djohar Sidhoum-Rahal, Fabrizio Li Vigni, Levi Qışın). I try to bridge different fields while making sure that the methodology and end results are sound.

I am generally extremely open to new collaborations, so don’t hesitate to drop me a line if you have an idea or would like to participate in some of our projects. After a decade of activism, I also recently decided to get involved in the more academic side of queer and crip theories (and am currently trying to set up a team to translate some of the main literature on the subject into French). This recently pushed me to start a second PhD in geography, on disabled spatialities, supervised by Jacques Lévy, as part of the Spatial Intelligence chair of UPHF.

I’m currently in the process of publishing a book on the use of randomness in politics. I’m also co-organising a CNRS working group on law and digital humanities, which evolved from our seminar with colleagues from EHESS, and am organising two sessions on geography of disability in the psychopolitics seminar at EHESS.

I have recently recruited Mehdi Bouhamidi as a PhD student on eye biometrics (without following the usual methodologies, we’re not trying to remake minority report). This project is detailed here.

Click here if you want to know a bit more about me, non-professionally.

Improving security by putting the human at the center of the system.
Enka Blanchard

Examiners: Adrian Kosowski and Marine Minier (president of the jury).

In Tangente and CIJM.
Enka Blanchard
Last updated on Jun 18, 2022

In schools and Worldcon
Enka Blanchard
Last updated on Jun 18, 2022

Mostly at EIDD and with Animath.
Enka Blanchard
Last updated on Jun 18, 2022